There are quite a few different ways in which marketers try and convince us to buy their products.  Possibly the most widely used method, involves identifying and exploiting common insecurities within a given demographic.

Marlboro for example, famously hired Wayne McLaren and branded their product alongside images of macho cowboys, in order to convince young men, insecure about their masculinity, that carcinogenic cigarettes were a good idea. 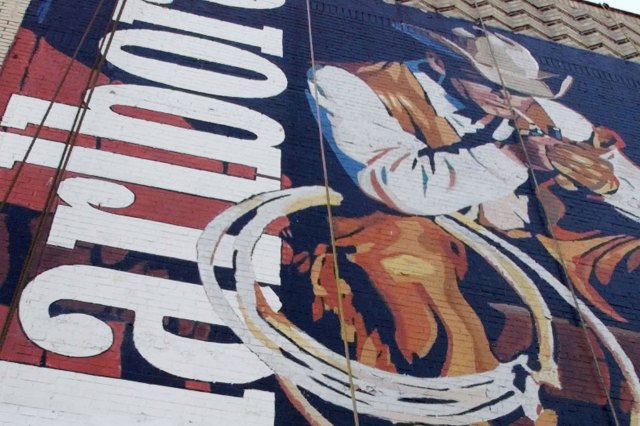 There are many examples of similar marketing campaigns – take the  ‘sports nutrition’ industry for example.  It’s pretty cowboy in a sense.
Promoting their products with images of steroid fuelled bodybuilders in order to sell whey protein; kinda seems misleading, but the fact that the physiques are unrealistic and unattainable without the aid of the local chemist, helps keep people insecure and therefore perpetuates their repeat purchases (check out the documentary ‘bigger, faster, stronger on youtube).

Now, I have been involved in marketing campaigns for sports nutrition companies, so I do understand the ‘game’ involved in selling things.  You need to balance the accoutant’s books and make money – unless you’re willing to take a massive chance and revolutionise the whole approach to marketing then I can understand the way in which these products are sold and branded (hats off to myprotein for doing this by the way).

I still purchase protein powder as well, and creatine, and the odd bit of alpha lipoic acid.  So despite being aware of all the BS marketing, and the fact that being 2 stone over your ideal/natural weight is very unhealthy (even if it’s 2 stone of muscle) I still continue to fork out every month – but why?

Incidentally, this is why you find that the biggest bellends in life, appear to complain about others the most.

For what everyone reason, people like hierarchies and power, and people, being people, will choose to live by a hierarchy within which they have the most status (and ignore all the other potential hierarchies).
A stereotypical massive meathead, bodybuilder, will for example, judge others on how big and hard they look, and look down about anyone that hasn’t got body-dysmorphia and feel superior.  I’m not saying all bodybuilders are like this, not at all. Some are the nicest people I’ve ever met…but certainly a lot of the closed minded teenagers that train for 2 weeks and then get on the nap tablets, are like this.

The same goes for other insecurities.  People will go-along with the marketing and feel that they need a pair of beats-by-Taiwan headphones for example, along with ensuring every other item of clothing being designer.  Again they may feel superior to those who don’t go along with this marketing BS, and either see-through it or just can’t afford it.

So again, in relation to this, although I hate designer clothes, the same way I am not a massive fan of the sports-nutrition industry; I will buy the odd bit of designer clobber, trainers for example.

I buy the odd bit of designer clothes, and buy protein etc. because despite understanding the mechanics of marketing and the exploitation of insecurities, I still feel insecure.

This is not because of my own insecurities directly…but because of other peoples’, kind of. For example, I don’t want some bodybuilders feeling superior to me, and thinking it’s okay to treat me in a certain way because I’m skinny, and I don’t want my friends who are into designer clothes etc. to be ashamed to be seen with me in my Primark pumps.

It’s like a proverbial vicious circle of people judging other people, and perpetuating insecurities and driving sales of unnecessary products.
It’s not that I have an issue with bodybuilders or fashionable people.  You can witness similar judgements and consequential behaviour in relation to all kinds of insecurities.  Some people think it’s really important to drive a swish car for example, perhaps because they’re image conscious or think it somehow gives them a certain entitlement.  They think it’s okay to treat people a certain way on the road because they have an expensive car, this makes other people want expensive cars to impress people and to avoid being treated a certain way on the road, etc. etc.

I think the answer to all this is hugs.  If we all knew that all our family and friends loved us unconditionally, we wouldn’t feel the need to put on any kind of a show for other people.
Also if people weren’t knobs it would help.  Don’t cut someone up on the motorway just because they have a tiny granny car, and don’t treat people differently because they’re a bit geeky and come across as physically weaker, for example.
If people were nicer, I wouldn’t have to upload MMA pics of myself to give it the biggun all the time

Moral of the blog post – be open minded enough, not to judge people by your own insecurities. Question what people and marketing messages tell you.

MMA, Fitness & Marketing enthusiast from North Wales, UK. A Stoic Hippy with no hair. Not to boast but - 1st Class Degree in Sports Science from Loughborough, MSc in Nutrition from the University of Liverpool. 20 years experience of weight & fitness training.
View all posts by Drew →
This entry was posted in Musings and tagged bellends, marketing, protein. Bookmark the permalink.