Too much Weights, Not Enough Speed Work

Some issues I’ve had from doing weights, and then attempting to move onto martial arts.

This is a criticism of myself, and nobody else.

1. Tight Muscles
I don’t know the exact science around this, but I’m guessing, the bigger your muscles are, the less room they have to move around the muscle sheath and around the actually joint itself.  I’m not sure, but all that squeezing, and minimal lengthening of the muscles, appears to cause a lot of muscle tightness.
Not only does it make all your muscles stiff and tight, making it near impossible to throw a punch, kick or escape from an armbar; it also weakens your posture as it’s normally pulled out of line by an overdeveloped and under-stretched chest.
Foam rolling and yoga is a must if you’re doing bodybuilding style exercises. Not just for functional strength, but for longevity in the sport/activity of weightlifting itself.  I also find tight muscles impacts my endurance.  Walking up hills for example, my fat legs can hardly move after an hour or two; literally pumped up with blood, and unable to bend.

2. Slow Muscles
The impact upon this will depend a lot on genetics. I’ve seen a 17 stone bodybuilder hit the pads like a ninja on acid, but he clearly has really good ‘fast twitch’ genetics and a background in boxing.  Generally speaking, if you lift slowly, that’s what your muscles will get good at.  So if you want to be explosive, something that’s pretty much essential in MMA; you will need to lift explosively. Whether this means adding in some plyometrics, Olympic lifts, or literally just doing some sets with less weight, and greater speed is up to you, but you need to do some explosive training and lifting if you are trying to get functionally fit and strong for pretty much any sport, including MMA.

3. Body Doesn’t Work as a Unit
If you do deadlifts, and squats, then this might not be the case. However, if you are king of the bicep curls, and tricep extensions, and don’t do many exercises standing up, and/or using your whole body at once, then again, your body will get accustomed to using muscles in isolation.  If you want to prevent this from happening, add some ‘whole body movements’, even if it’s just into your warm up – for example Turkish Get Ups, single leg deadlifts with a light weight – or ideally add some big compound movements like clean and presses into your actual workout

4. Full Extension of the Arms
So I’m doing a workout in my spare room, right now, this is being written in between sets.  I did some shadow boxing to warm up, filmed myself, it was terrible. I just can’t seem to full extend my arms when I’m punching. I’m guessing that this is from years of lifting weights, and being told never to extend your arms fully.  Perhaps I’ve taken this a bit too far, I don’t know, but now I seem incapable of locking out, or near locking out my elbow with any movement.  Just another thing to bear in mind if you’re training at the gym to get massive, but also to get functionally strong and fit.

5. No Strength, for ‘real’ movements
Just a quick example of this, bench press on a bench is great, but when you do a ‘chest movement’ in a sport, it will generally by against an unstable or against no surface at all, and you will want to rotate your hips and extend into the movement. With barbell bench press, your back is flat, you use both arms at the same time, there’s no core stability required etc.
A better, or good additional exercise I have found for this particular movement, is single arm kettlebell press on a stability ball. Extend fully into the movement, so that when you lift the weight with your right arm, the right hand side of your back rotates off the ball, and your reach the weight up as high as possible.
The bench press is just one example, of many weightlifting movements, that make your look stiff and cumbersome when you’re trying to grapple etc.  One thing to also note is that grip strength is arguably the most functional strength there is.  Do at least one heavy set of back exercises, without weightlifting straps; otherwise your back muscles and biceps will be useless when grappling. Neck strength is also of huge importance for grappling, again something that bodybuilding exercises don’t directly target.

Even with all this considered, it still looks better to be massive, and your less likely to attract girls with your functional strength; I’d imagine. 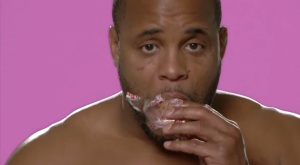 MMA, Fitness & Marketing enthusiast from North Wales, UK. A Stoic Hippy with no hair. Not to boast but - 1st Class Degree in Sports Science from Loughborough, MSc in Nutrition from the University of Liverpool. 20 years experience of weight & fitness training.
View all posts by Drew →
This entry was posted in Fitness, MMA and tagged conditioning, mma, strength, weightlifting. Bookmark the permalink.