I thought this fight could go either way, Johhny Hendricks is pretty consistent, and normally a safe bet against any welterweight ranked outside the top 3.  However, ‘The Wonderboy’ has kicks and athleticism, that are beyond anything that I can recall seeing in the UFC.  With this kind of skill-set, and those kicks in his arsenal, he is a danger to any fighter.

I didn’t think it would be the white-wash it turned out to be though, so what happened?  Was Big Rig just outclassed?

Quite possibly, however, I think one of the early head-kicks stunned Hendricks, and put him off his game-plan.
He was stalk-walking down Thompson, then stopping about a foot outside his own range.  Then hesitating and getting caught by Thompson, or overreaching and getting countered. 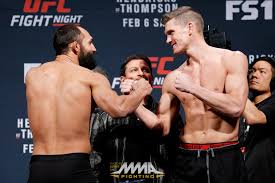 Staying just outside his own kicking range, Hendricks had 2 chances of success – Bob Hope, and no hope.  When he wasn’t getting caught, he was backing up rapidly in response to anything Thompson threw; moving out of danger (to a certain extent), but also going in the opposite direction of his own striking range.

Possibly an instinctive thing to do – damage limitation, after getting caught with a few good shots.  Don’t get me wrong, it’s far easier said then done, and I am indeed an armchair-fan these days, but staying in the pocket and countering is normally the way to bridge the range-gap against a taller guy; not backing up when they step in with a strike of their own.

So what could he have done differently?
– Let Thompson move forward.  Kinda like Nick Diaz attempted to do against Anderson Silva. Tall strikers are often at their best when you consistently move forward and try and initiate the striking. 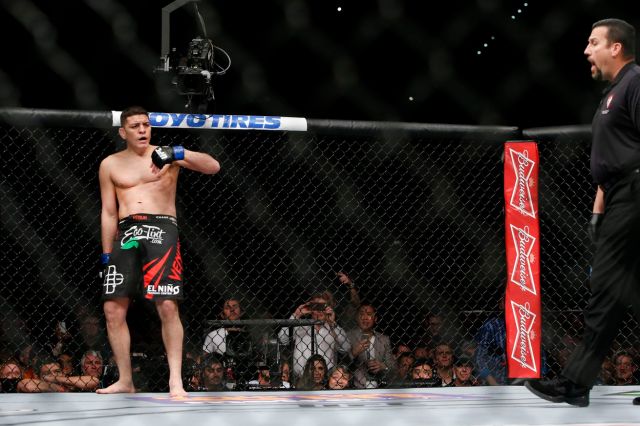 – Vary his pace a little.  It was kind of predictable, and easy (from the sofa) to see any Hendricks-offence coming. There were no feints thrown either.  I would be interesting to see wrestlers dummy the takedown more, and make the opponent fight a war on two fronts; so to speak.
– Perhaps – he could have used low kicks, to initiate a counter from Thompson, slipped/defended the counter to stay in range and then throw a counter, to the counter.  If that makes sense…in other words, bait Thompson to throw something, then counter when he does.
– Counter the long side kicks.  I don’t know what the counter is to an oblique kick, or a side kick, but it’s now so common for tall strikers to use it, that this should be part of a game-plan.
– Finally, and most controversially – try a low single like Bader against Johnson.  “What are you on about you bellend?” are hear you say – well, it didn’t end well for Bader, but he didn’t follow up. He shot for the low single, and then instead of immediately following up on Johnson’s sprawl, he turtled up.  If he’d have anticipated the sprawl, and had a counter ready to go straight after he shot in, he might have ended up in a grappling situation, in top position.  This is not something Hendricks should have tried, until perhaps things got a bit desperate for him, but I think a low single might be a good technique for wrestlers, if they find a way to follow up and counter a sprawl.

Disclaimer – I don’t know anything

MMA, Fitness & Marketing enthusiast from North Wales, UK. A Stoic Hippy with no hair. Not to boast but - 1st Class Degree in Sports Science from Loughborough, MSc in Nutrition from the University of Liverpool. 20 years experience of weight & fitness training.
View all posts by Drew →
This entry was posted in MMA, Uncategorized and tagged fight breakdown, fight night 82, Hendricks V Thompson, ufc Hendricks V Thompson. Bookmark the permalink.