This is a reference for myself more than anything. My training is so sporadic at the moment that I keep forgetting bits. Here’s so ‘boxing hacks’ (sorry to use the terms hacks, but it is searched for a lot online).

The Russian Hook or Casting Punch

To throw a hook with a longer-reach, throw it like a slap then turn your thumb down at the end.
To generate power and ‘elastic recoil’ relax your arm and drive your shoulder through first, opening up the chest as you whip the arm and hand through at the end of the movement. 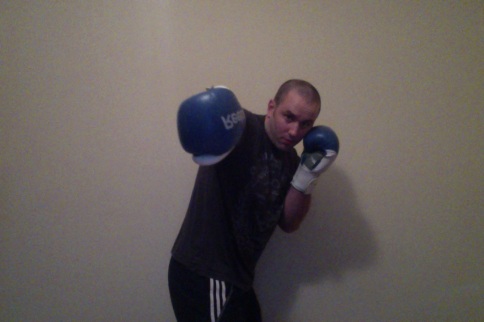 Protect your chin with your lead Shoulder

Some say this reduces your power and makes it awkward to punch, which is possibly true. I like to turn my chin so that it’s against my shoulder though, and lean back with a high elbow when defending.

Roll after a Lead Cross

People love to counter crosses. Use the Floyd Mayweather style roll to get out of the way

Change up your Pace and Rhythm

Practice this on the bag and pads. When on the bag, don’t just go in and out – throwing a 3 or 4 punch combo, then moving around for a few seconds and getting back into range.

This pattern becomes predictable and everyone has a ‘twitch’ as to when they’re going to throw. Throw feints – just twitch your shoulders, throw feeler jabs, throw single punches, throw a jab – then step into range, throw combos.
Sometimes you may want to be less mobile, and just wait for your opponent to throw then counter. Switch it up.

More of a personal note to myself – other people like to dodge and move and pivot. I like to do that sometimes, but as a former 5ft 10 LHW fighter, I have learnt to step into punches to get into range. In thai boxing I’ll cover up and step forwards with my right (rear foot), to the right and throw an inside leg kick. This is important if you’re short for your weight class.

In a street fight, or at least a confrontation that starts toe to toe, I would say do the opposite, it’s different without gloves on and it does slow the punch down a bit.

But, you definitely get more power. Imagine you’re trying to skim your ear with your elbow as you throw a jab or a cross and turn your thumb right down.

I would mix this up with faster, feeler jabs with the elbow down and the thumb up.

When in close and in an actual fight, I think punching with low elbows, is actually the best option as it’s much quicker

From further out though, the high elbow definitely generates more power. Mix them up, it’s okay to have 2 or 3 different jabs.

Again, no idea of the mechanics of this, but with looping or hooking punches, coming down as a 45 degree angle with a high elbow appears to generate more power.

Using a low kick as an example, kick down like your chopping a tree down with an axe when kicking the outside of the leg.
Hooks also appear more powerful when hitting down with a high elbow.

Flick From the Shoulders, Drive from the Elbow

Stay relaxed and don’t try to generate all the punching power from the ‘starting position’. With straight punches, start the punch with a relaxed flick from the shoulder then twist from your back foot and drive again from the elbow as your arm extends.

Similar to doing an Olympic Lift like a power clean, you have 2 points of ‘explosive power’. In a power clean you drive from the feet & legs in the pick up stage, then explode again with the hips.

Don’t wait until your jab has finished, until you’ve finished your cross, for example. As soon as you’ve initiated your first punch, initiate the second.

For more tips please see my striking technique directory and Like my FB page below. Thanks.

MMA, Fitness & Marketing enthusiast from North Wales, UK. A Stoic Hippy with no hair. Not to boast but - 1st Class Degree in Sports Science from Loughborough, MSc in Nutrition from the University of Liverpool. 20 years experience of weight & fitness training.
View all posts by Drew →
This entry was posted in MMA and tagged boxing, boxing hacks, boxing tips, floydmayweather. Bookmark the permalink.