How I overcame Depression & Suicidal Thoughts

I’ve had some discussions with mates, usually when they’ve had a few beers, about mental health and related issues. I’ve explained my issues since childhood and how I’ve managed to overcome them; but I could never coherently explain how I went about it, so I thought it would be easier to write it all down.

If someone of something is fragile, every time they get kicked, or put down, they weaken. If someone or something is ‘anti-fragile’, the opposite happens, they strengthen. Comfort builds weakness and suffering (to a certain extent) builds character. Don’t feel sorry for yourself, Victor Frankl survived the concentration camps by finding purpose (his family) and having a dark sense of humour and then survived the fact that all his family had died in concentration camps by finding meaning in his work.

He was anti-fragile because he found meaning and didn’t feel sorry for himself. If he endured a Nazi concentration camp and the death of his entire family, you can probably endure your own problems with a sense of humour.

I became depressed after graduating university with a first class degree and an MSc. These qualifications that I had, coupled with zero relevant experience, effectively made me unemployable. I used to feel angry about it, having being pushed into academia by my family, I often blamed them for this, however, having a sense of humour about it and taking ownership of this allowed me to overcome any negative emotions that I had.

Once I accepted that it was my own fault, for not looking into the job opportunities in the local area and for not looking ahead 4 years to what I was going to do upon graduation and my own fault for not having any type of plan, or contingency plan, I no longer felt bitter about it. Maybe you made some bad decisions in the past but unless someone held a gun to your head and forced you to do A or B, then you really should take 100% ownership of those decisions, and quit bitching about where things went wrong and blaming others. Watching Jocko Willink’s video below literally changed my life:

Taking ownership empowers you and improves optimism and confidence, blaming others makes you bitter and promotes ‘learned helplessness‘.

Ownership stops you from making excuses when you do something wrong – whilst you judge other directly on their actions & have a special excuse for your own. It stops you from being judgemental, which is a great bonus.

Changing your diet, can literally overhaul your mental outlook and mental health. People can give you loads of abuse about it but it’s just something you get used to (be anti-fragile about it!).

Cutting out milk had a massive positive impact on me and also helped get rid of my asthma and 3 inhalers completely – then reducing and eventually quitting wheat and sugar also made my IBS vanish overnight. Using baking soda and making an effort to eat an alkaline diet reduced how much I was aching all the time and my acid reflux died down and let me stop taking omeprozole. Some people can get away with eating poorly, but if you look at the growing number of auto-immune diseases and IBS sufferers, it suggests that many of us should be looking at what we’re eating.

I can’t emphasise enough how important diet is for mental health. Mental health problems have been directly tied to gut issues and the consequential systemic inflammation that can result from a poor diet. If you have IBS, my best suggestion would be to read up on the FODMAP diet, consume some fermented foods each day and take things from there. Cutting out food groups like dairy and wheat, remains somewhat controversial in clinical nutrition, but I honestly think that making these changes in my diet, literally saved my life.

I’m currently on week 2 of the ketogenic diet – as their is plenty of research that it can help those with a range of mental health problems.

Unless your diet is perfect, you may need to consider a few supplements. Those that I would recommend include:

If you have issues yourself, you have to avoid negative people and highly judgemental people. Being around judgemental people, makes you anxious, because you’re always on edge and conscious about what you say and do, as you don’t want them to be bad-mouthing you as soon as you walk away.

If you are judgemental, you push yourself into a corner and can’t really laugh at yourself. For example, if you go ape-shit over someone making a silly mistake, you can’t laugh at yourself when you do the same. Those around you will also feel really ashamed if they make a mistake and are more likely to try and hide it, rather than to ask for help. More info on this here.

Emotions are contagious, so make an effort to be positive and associate with positive people. Fortunately my gym has a very positive vibe and anyone being negative gets proactively ridiculed (in a positive way).

Surround yourself with positive people who don’t take life or themselves too seriously. If you’re friends are all judgemental, get down to a yoga class or a BJJ Class, or join a decent MMA gym.

If you can’t find a group of positive friends to hang out with, try and constantly read and listen to uplifting people. Get some good audiobooks about Stoicism and wellbeing etc and listen to them in the car and in bed. 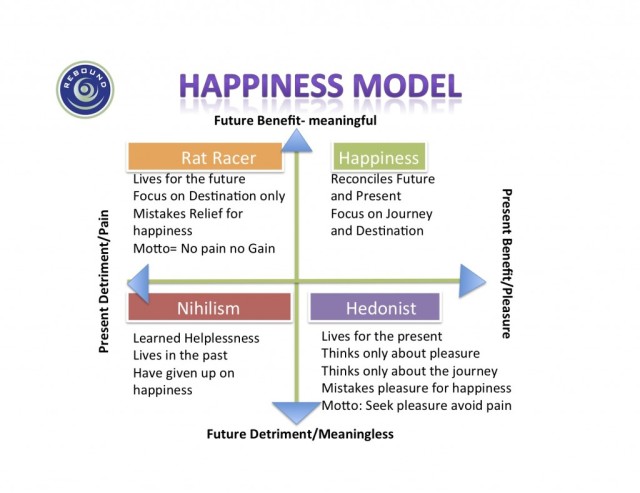 Sometimes you have to endure voluntary suffering and discomfort, to be happy down the line. You need the self discipline to avoid the ‘instant gratification monkey’ in your brain who is telling you to adopt behaviour that feels great in the present, but may have pretty dire consequences in the near future. 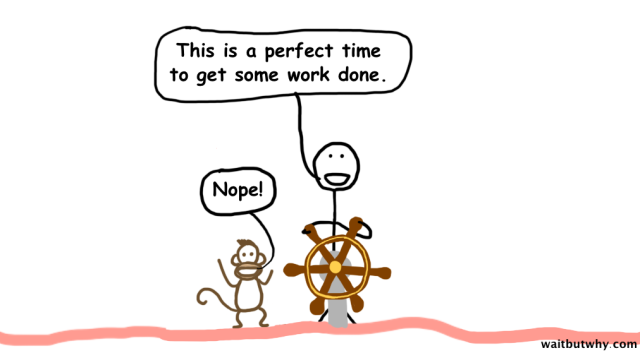 These things are enjoyable at the time, but tend to have detrimental effects on mental wellbeing when they are consistently performed/done/carried out.

These behaviours build character and mental wellbeing. Sometimes they will feel unpleasant when carried out, however the long term benefits can be substantial.

Be Stoic Not Cynical

Expect people to be out for themselves, expect money to corrupt, expect large organisation to be greedy…having a hissy-fit about these things is not helpful.

People are a product of their upbringing and their DNA, even the decisions that they make are effectively pre-determined by how their character has been formed. Stop judging, start understanding and you will feel a million times better.

For an introduction to Stoicism, the book the Antidote is pretty good. If you don’t have time to read books, get the audio book version and listen to it in the car.

You can’t take on the problems of the 7 billion people in the world. Negativity sells and scare stories about terrorism etc make us anxious and paranoid. Coca Cola kills way more people than terrorism, but people aren’t scared about soft drinks.

We’ve evolved whilst living in tribes of around 100 to 150 people, and our brains our only designed to care about this many people.

In all aspects of life, from MMA to diet, to business ideas, don’t just recite what you’ve been told in school, forward-think for yourself and seek our information, develop your own thoughts and ideas. With primary resources of information such as academic articles and journals available at our fingertips on the internet, self-help is, often the best course of action.

Never Ever Feel Sorry About Your Lot in Life

I’ve known street-children become millionaires (well, known of them), shit happens, every starts off from different starting positions, just don’t be bitter about it if your friend has a richer family or a slightly easier life.

In the grand scheme of things, now is the greatest time to be alive since civilisation began, we have a world of knowledge at our fingertips thanks to the internet and besides, feeling sorry for yourself is never helpful.

I’m in agreement that most people who take drugs like cocaine on a regular or semi-regular basis are not people to aspire to be like.

However my attitude on psychoactive substances such as those found in magic mushrooms changed thanks to Joe Rogan and videos like the amazing one below:

I’m not recommending going out, picking a load of liberty cap mushrooms and eating them, but the research conducted at Johns Hopkins university could certainly bring hope to millions of depressed and anxious people.

“The most interesting and remarkable finding is that a single dose of psilocybin, which lasts four to six hours, produced enduring decreases in depression and anxiety symptoms, and this may represent a fascinating new model for treating some psychiatric conditions,”

MMA, Fitness & Marketing enthusiast from North Wales, UK. A Stoic Hippy with no hair. Not to boast but - 1st Class Degree in Sports Science from Loughborough, MSc in Nutrition from the University of Liverpool. 20 years experience of weight & fitness training.
View all posts by Drew →
This entry was posted in Psychology and tagged anxiety, depression, depression and anxiety, diet and depression, mental health, wellbeing. Bookmark the permalink.

1 Response to How I overcame Depression & Suicidal Thoughts