We Are All One (Why Nobody Really Dies)

It was World Mental Health Day yesterday. I’m not a huge fan of ‘awareness’ days, I think they bring problems but not solutions.

Quite a complicated issue!

Marketing, social media and expectations relate mostly to the hippy notion of ‘we are all one’ though…

If shopping malls were only frequented by Buddhist Monks, they wouldn’t sell anything.

People who are content, still have ‘needs’ such as food, water and shelter, but they don’t have ‘wants’ such as flash cars, clothes etc.

The key to marketing is to make people think they need certain products, that they actually only want.

Want to be happy? You need x, y and z

Want to be successful? You need a, b and c.

Best of all, people are gullible enough to pass on their insecurities to others.

If you don’t wear the right clothes, for example, they’ll always be someone to mock you for it. Unaware they’re just projecting their insecurities (and marketing messages) onto you.

The big consequences of all these marketing messages, is we become insecure and therefore self-absorbed.

We think of what we lack, what we want, and we become self-absorbed and feel separate from others.

In my eyes, it’s this separation from others that is an illusion and also a problem

One 30 second scroll down your Facebook newsfeed, allows you to compare your life with dozens of other people. Usually with an unfavourable outcome.

We watch, seemingly stupid people on TV shows like TOWIE, owning Range Rovers and having loads of other expensive material goods and we feel entitled to the same.

We also compare our looks, wealth and again, become self-absorbed as a consequence.

It’s All an Illusion

We are happiest when we lose the concept of ‘self’.

When we are busy playing a sport and focused on the ball, or when we are watching an edge-of-the-seat TV programme, for example. They both take away our pre-occupation with ourself.

The irony is, is that there is no self.

Look at it from a scientific point of view.

The more separate we feel and insulated we become from one another, the more mentally ill we appear to be.

We either become a narcissist or highly self-conscious and insecure. Either way, it’s constant thoughts of the self that bother us.

It’s all bollocks, we’re all one energy, one parallel consciousness

In death, the collection of atoms of which you are composed (a universe within the universe) are repurposed. Those atoms and that energy, which originated during the Big Bang, will always be around. Therefore, your “light,” that is, the essence of your energy — not to be confused with your actual consciousness — will continue to echo throughout space until the end of time.

What is the self?

Does it really exist?

I don’t think so 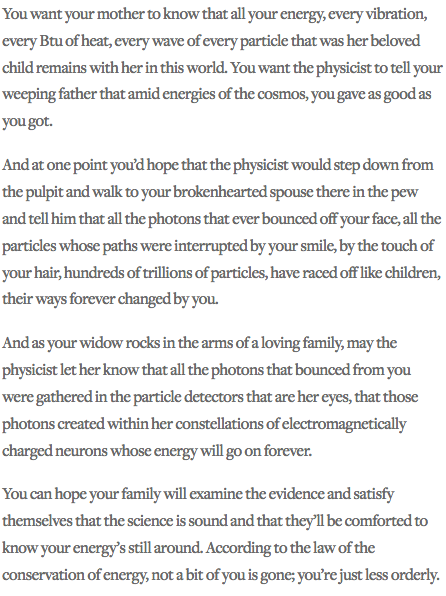 For some less vague and whoo-whoo advice on depression, I’ve written a few in-depth posts about it – which you can read here and here

MMA, Fitness & Marketing enthusiast from North Wales, UK. A Stoic Hippy with no hair. Not to boast but - 1st Class Degree in Sports Science from Loughborough, MSc in Nutrition from the University of Liverpool. 20 years experience of weight & fitness training.
View all posts by Drew →
This entry was posted in Musings, Uncategorized and tagged anxiety, depression, mental health, mental health day, mma, physics, world mental health day. Bookmark the permalink.