Fighting a Bigger Guy or Opponent

How to Fight a Bigger Guy and Win

There’s a lot of google searches for ‘how to fight a bigger opponent’ so I thought I would try and address the issue.

Here are some pointers to begin with:

1. Taking Down a Bigger Opponent

I like to set up a takedown with a double jab to get into range and then shoot for a single leg and rotate to the back. This is a good example of what I mean:

Generally speaking, against a bigger guy you don’t want to try and move him around, it’s too hard and takes too much energy, you want to take his back or get to the back of his leg in this case.

Here’s Genki Sudo taking ButterBean down with a low single:

Another way to take down a bigger guy, is to shoot, but then instead of trying to drive through for the finish, spin to his/her back and either scoop the legs or lateral drop – keep rotating so you end up on top

2. Fight at Your Range, Not His

If the big guy is also tall, don’t try and reach him from just outside your range. This will be perfect for him to pick you off as you stretch to reach him. Instead, make him come to you by staying just out of his range, or move forwards using bob and weave head movement:

You can also use feeler punches like a quick jab to draw him into standing his ground, this is the opportunity to bob and weave and get in your own range and throw punches.

See also the way Floyd Mayweather throws a cross then ‘rolls’ to avoid a counter. A good taller guy will often look to counter, so this is a good tactic to employ.

If fighter a tall counter fighter, you can also stand out of range and make him come to you. Just don’t stand in his range and try and over-reach! Anderson Silva is one of the best counter-fighters of all time, Nick Diaz did what he could to ‘draw him in’. Never chase a counter fighter down, that’s what the want you to do!

3. Throw a Jab With your Head to the Side

Jab with head to the side. Turn thumb down at the end of the punch. You can also side step to the left & forwards

Generally speaking it is best to work inside ‘the pocket’ to use your shorter range. If you watch Mike Tyson he would walk down opponent’s until they were against the ropes and throw hooks and uppercuts to the body and head.

DON’T stay just out of your own range, ‘reaching’ for the punches to land on your opponent. Once inside the pocket, beware of the clinch and knees. Work these extensively, defend the clinch by posturing upwards and shrugging your shoulders as if doing a ‘shrug’ exercise, this will make it harder to pull your head down, and thrust your hips forwards for the same reason. Pummel inside his clinch, push on his chin or reach around the back of his head and put one foot forward to block the knee-strikes.  It can also be effective to block a knee, by throwing a knee yourself.

5. The Overhand Right and Russian Hook

These are great punches against bigger opponents. The overhand right is a trademark punch of Fedor and Roy Nelson, whilst the Russian hook is also a Fedor favourite.

Below Mark Hunt demonstrates the overhand right first, and then a leaping left ‘Russian Hook’.

The overhand right is like a bowling action, initiate the punch with the chest and abdominal muscles (flex your trunk slightly, ‘look at his boots’ to lower your body to initiate the punch), extending the arm then finally, when elastic energy is built up in the chest, throw the punch in a looping fashion.

The Russian Hook involves throwing the punch and rotating the fist so that the pinky finger is on top. This gives the punch extra range, in fact you can throw the punch with the arm virtually straight – giving it the range of a straight punch like a jab, but the power of a hook. 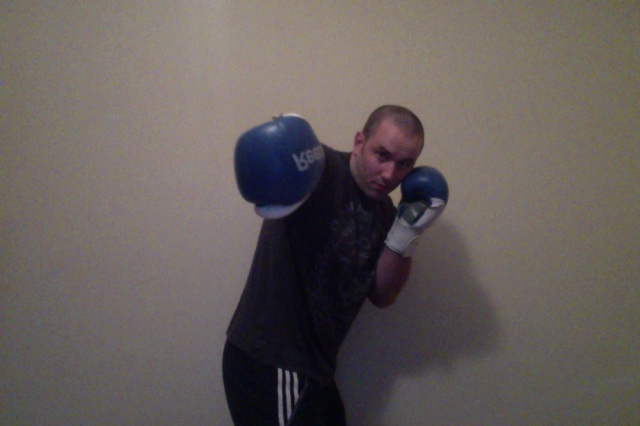 A taller guy will often wait for you to commit to a punch, move out of range and counter you with his own jab. Keep him guessing as to when you will throw a punch, by twitching your hands and shoulders as if you are about to throw a punch and throwing really quick and ‘soft’ – feeler jabs. If he take the bait you can counter his jab with a parry and a cross or an overhand right.

7. Beware the lean or lay-back

A classic technique used by a taller opponent is to lay back, out of range. If this happens, try working the body (or kick the legs or shoot for a single leg if its an MMA or street fight). An alternative is to refuse to chase him down – stand your ground, don’t chase him and make him come to you.

A couple of final tips. Counter a jab with an inside leg kick against a bigger and taller guy. Also, if you’re opponent is throwing kicks, remember than if you continuously ‘walk him down’ he will find it very difficult to throw any roundhouse kicks, but you will have to beware the jab and front kick.