Why Every MMA Fighter Should Learn to Fight Southpaw

I remember one of the first times that I attended a boxing class – the first thing I was asked was “what ‘handed’ are you?”, to which I replied – right handed – “orthodox stance then” was the reply.

MMA however, being a new sport which has been blended from a range of striking styles, often break the rules of traditional boxing.

Bruce Lee used to encourage his students to fight with their strongest hand forwards as well. The idea behind this is that the jab can deliver more power with your dominant hand. Both the jab and the hook and cross from the rear hand offer a substantial threat of a knock out.

If you’re striking style is jab-dominant, this can be a great strategy. Either way, you effectively make your opponent very wary of punches from both hands, making him/her fight on two fronts.

When Brandon Vera beat Frank Mir – quite an upset at the time, he said that switching up stances confused Frank. It’s confusing enough fighting a southpaw – having punches come from the opposite angles that you’re used to.

However, a fighter mixing up both stances and interchanging them seamlessly can completely baffle opponents. It’s difficult to gauge range, angles and timing.

The first time I noticed anyone using a ‘step through’ right cross to increase range and bridge the distance was Evan Tanner’s second fight with Phil Baroni.

This requires practice and timing so that you don’t end up jumping into a punch, but stepping forwards into a southpaw stance and being comfortable fighting from there, can literally double the range of your punches.

Update: I believe that TJ and Team Alpha Male refer to the ‘step-through’ as ‘The Dart’.
Here is TJ Dillashaw using it to move from southpaw to orthodox stance to bridge the distance with a left cross:

Easier to Counter a Jab

When fighting an orthodox fighter, you would normally parry his jab with your right hand. Against a taller opponent countering can be tricky because your right hand is so far away from your opponent.

However, in southpaw stance your right hand is forwards, so it’s a lot easier to follow up and counter your opponent’s jab with a punch of your own. Using your dominant hand, it will be easier to generate power for a lead hook or overhand right too.

It’s definitely a lot easier to create angles for attack if you can switch stances. It’s also easier to get on the ‘outside’ (to the right) of an orthodox fighters jab.

This is the safest way to create an angle as stepping to the outside of the jab doesn’t present the threat of walking straight into a right cross. 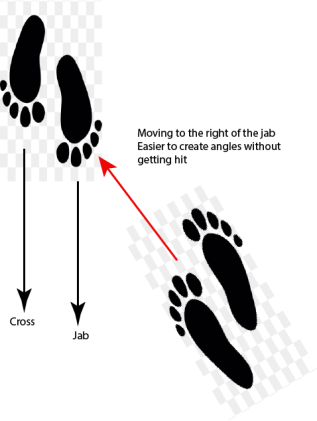 As you move to the right, you also move away from the opponent’s power-punch from the rear right hand (see Bisping Vs Henderson UFC 200 for an example of circling into a big right hand).

Easier to Snatch a Single Leg

Most wrestlers seem to prefer wrestling with their lead leg forwards, so many will find it easier to shoot a double leg from southpaw stance.

It’s definitely easier to execute a single leg takedown, even without a shot. With both lead legs so close to each other, you can set up a single with a jab to the face and the snatch the opponent’s lead leg:

I always think it’s good to have a backup game plan. It’s pretty common to see a fighter’s style and gameplan completely shutdown and countered. This is extremely frustrating and often leads to a fighter overcommitting and getting KO’d.

Being able to completely mix things up with a change in stance can add a completely new dimension to both your striking and grappling. As discussed above it may also make it a lot easier to take your opponent down.

In conclusion – if you’re shite at boxing like me, a good overhand-right/left is often a good ‘leveller’ against someone with great technique, but being able to switch and integrate stances will confuse the hell out of boxer’s (and MMA fighters) who are not used to it.

MMA, Fitness & Marketing enthusiast from North Wales, UK. A Stoic Hippy with no hair. Not to boast but - 1st Class Degree in Sports Science from Loughborough, MSc in Nutrition from the University of Liverpool. 20 years experience of weight & fitness training.
View all posts by Drew →
This entry was posted in MMA and tagged boxing, fitfam, Fitness, martial arts, mma, southpaw, technique. Bookmark the permalink.