The Alkaline Diet has many claims associated with it such as increased bone density, enhanced immunity and even a reduced risk of cancer.

As vegetables tend to be alkaline and meat tends to be acidic, ‘veganism’ is often incorporated into the diet – i.e. Vegans are also often on the alkaline diet (Vegan Diet explained on a previous blog post).

The basic principle is that, in theory at least, replacing acid-forming foods, such as meat and dairy, with alkaline foods such as raw, green & leafy vegetables, can improve health.

Some proponents even claim that an alkaline based diet can help fight cancer. This sounds quite outlandish, but I have found 1 study which shows that bicarbonate of soda (AKA Baking Soda), a very alkaline ‘food’ can reduce tumour size, albeit in large quantities. Whether or not the health benefits of the alkaline diet are down to the alkaline levels of the food per se, or the nutrient-dense foods that comprise the diet, is difficult to establish.

The diet is also known as the ‘alkaline-ash diet’ because it is believed that once a food has been broken down and utilised for energy by the body, it leaves behind an ash residue. If a food produces an acidic ash, then it is thought to make you vulnerable to a number of diseases.
It’s important to note that food cannot change the pH of your blood – which should always remain between 7.35 and 7.45, but it can have an impact on the pH of urine. Those athletes who have ever supplemented with baking soda or beta alanine, will also tell you that the pH of your muscles can also have a dramatic impact on the way you feel and perform during intense exercise such as grappling or MMA.

Modern scientific research does not support the theory that the alkaline diet prevents cancer, but many point out the many flaws in modern research, with much of it being sponsored by pharmaceutical companies (there’s even a union of concerned scientists who refuse corporate funding because of how corrupting it is). If you look hard enough, there’s the odd study knocking about, like the baking soda one mentioned above. There are also studies which suggest that our ancestors ate diets which were high in alkaline foods – about 87% of all the foods consumed before agriculture & farming became a thing, were thought to have been alkaline.

Foods to Avoid on the Alkaline Diet

Foods to Eat on the Alkaline Diet

Fruits, nuts, legumes & vegetables. Cashews and almonds are thought be be the most alkaline forming nuts

The Benefits of an Alkaline Diet

Possibility that kidney function may improve/less stress on kidneys

Less grains can mean less gut inflammation for many people

Hard to over-eat on a low grain, low sugar diet

The Negatives of an Alkaline Diet

Restrictive & difficult to implement when eating with friends etc.

Takes a while to get used to

Snacks – Nuts, seeds – a bit of a cheat meal for lazy people like me would be hemp protein, olive oil and kale-powder shake. Almonds & cashews are the most ‘alkaline-forming’ nuts.
Hemp seeds are moderately alkaline forming, however hemp protein is mildly-acid-forming. So make your own smoothies whenever possible, using the seeds. 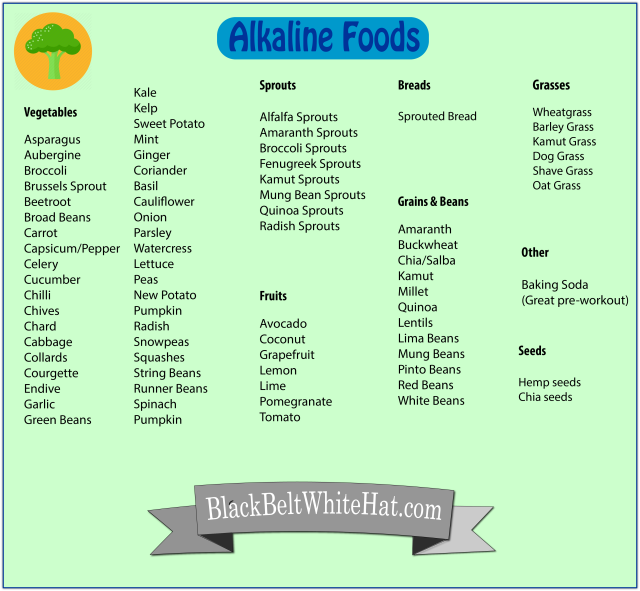 MMA, Fitness & Marketing enthusiast from North Wales, UK. A Stoic Hippy with no hair. Not to boast but - 1st Class Degree in Sports Science from Loughborough, MSc in Nutrition from the University of Liverpool. 20 years experience of weight & fitness training.
View all posts by Drew →
This entry was posted in Uncategorized and tagged alkaline diet, mma, protein, vegan, vegan diet, vegetarian. Bookmark the permalink.