Adaptogens are herbs or foods, that increase the body’s ability to cope with and adapt to stress.

Adaptogens are a unique group of herbs & plants that can help to improve or maintain the health of your adrenal system – which in turn impacts upon immune-function and mental health. They are also used to enhance focus & to combat fatigue in a way which enhances overall health & wellbeing.

Adaptogens are often used by people seeking overall health benefits and/or those suffering from long-term stress and fatigue.

…adaptogens exhibit neuroprotective, anti-fatigue, antidepressive, anxiolytic, nootropic and CNS stimulating activity. In addition, a number of clinical trials demonstrate that adaptogens exert an anti-fatigue effect that increases mental work capacity against a background of stress and fatigue, particularly in tolerance to mental exhaustion and enhanced attention.

How Do Adaptogens Work?

They can work and help in a number of ways, but primarily they reduce inflammation (a pre-cursor to many physical and mental health problems) by reducing the activity of a range of enzymes, known by the abbreviation of “JNKs”.

Prolonged stress causes the body to lose control over its inflammatory response, which in turn causes a range of health problems, including mental & physical fatigue, anxiety and depression.

Stress wreaks havoc on the mind and body. Until now, it has not been clear exactly how stress influences disease and health. Now researchers have found that chronic psychological stress is associated with the body losing its ability to regulate the inflammatory response. The research shows for the first time that the effects of psychological stress on the body’s ability to regulate inflammation can promote the development and progression of disease.

Which Herbs Are Adaptogens

Rhodiola Rosea is used in traditional Scandinavian medicine and Chinese medicine. It is the most popular of the adaptogens and is well known for its ability to reduce fatigue and increase mental alertness. It is a herb that grows in the cold regions of the world, including in Antarctica. In some parts of the world it is eaten just like any other vegetable, often as part of a salad.

The herb contains an impressive 143 natural, bioactive compounds, including antioxidants, flavonoids and terpenoids. It has been used for thousands of years and is even listed as a medicinal herb in the famous Greek ‘medical journal’ from 2,000 years ago – De Materia Medica.

Panax Ginseng is renown for its ability to improve mood and focus. It is also used by many to treat chronic fatigue syndrome and by a variety of holistic and clinic therapists to treat gut inflammation. There is quite a comprehensive paper here, that examines the role of panax ginseng in the prevention of cancer. Interestingly, it is also used for erectile dysfunction.

Popular with followers of Ayurvedic Medicine, Ashwagandha has been subjected to literally hundreds of studies and is proven to be effective for the treatment of stress and anxiety.

Studies indicate ashwagandha possesses anti-inflammatory, antitumor, antistress, antioxidant, immunomodulatory, hemopoetic, and rejuvenating properties. It also appears to exert a positive influence on the endocrine, cardiopulmonary, and central nervous systems. The mechanisms of action for these properties are not fully understood. Toxicity studies reveal that ashwagandha appears to be a safe compound.

There are a number of other adaptogens, but the 3 above are the most well known and researched. Others include:

Adaptogens are the healthiest way to increase focus and reduce stress. There are a number of other supplements, some of which have health benefits; whilst others don’t. 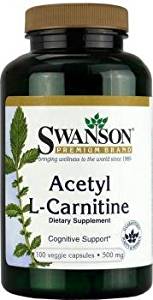 This amino acid is (in some countries) used to treat brain disorders, depression and chronic fatigue. It’s also a really effective supplement for increasing male fertility.

It’s highly effective for improving focus & memory and is often combined with a choline supplement.

ALCAR can be purchased from Amazon. Bear in mind that L-Carnite is not effective as ALCAR in terms of its impact on focus.

I would not recommend using this supplement more than 3 or 4 days per week. If you are interested, you can learn more about it at examine.com and selfhacked

In my next ‘productivity’ post, I’ll touch on other supplements for increasing brain function including Lions Mane Mushroom…

MMA, Fitness & Marketing enthusiast from North Wales, UK. A Stoic Hippy with no hair. Not to boast but - 1st Class Degree in Sports Science from Loughborough, MSc in Nutrition from the University of Liverpool. 20 years experience of weight & fitness training.
View all posts by Drew →
This entry was posted in Fitness, Nutrition and tagged adaptogens, business, diet, fitfam, Fitness, wellbeing, wellness. Bookmark the permalink.