Michael Bisping’s Career – The Toughest Middleweight of All Time 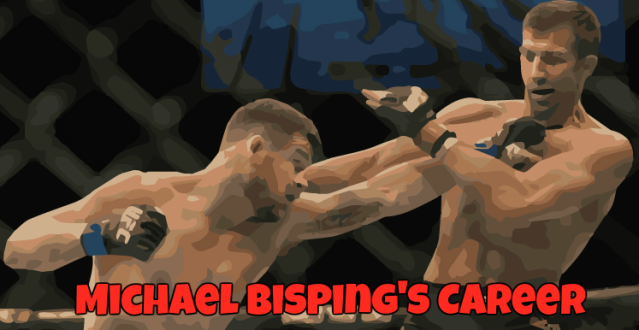 Say what you like about Michael Bisping, but he has heart, bravery and fitness like nobody else the middleweight division has seen.

He’s been a top 5 middleweight for years and has fought in the UFC for over a decade. He’s consistently been edged out in number 1 contender elimination fights, usually to someone taking the infamous TRT (Testosterone Replacement Therapy). He’s been extremely unlucky; it was even a TRT fuelled Vitor that damaged his eye with a head-kick. Whilst others would throw a pity party and be angry, Michael Bisping fought-on.

He has impressive victories against the legendary Cung Le (Le tested positive for drugs after the fight), Anderson Silva (the greatest of all time) and of course Luke Rockhold.
Bisping took the title fight against Rockhold on short notice, despite losing pretty emphatically in their first UFC match-up. A real ‘balls of steel’ moment for Bisping to take the fight, then win by KO in the first round.

Michael Bisping – I salute you sir